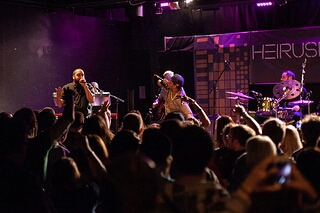 “Better late than never…
They say we talkin’ to loud.”

I just love the poetical intro to this song by singer Chasity Brown as she puts her vocal stamp on Heiruspecs track “On The Ground”. Singers/artists, songwriters, and musicians don’t get enough credit for reeling a listener in within the first 1-10 seconds of song (a la Whitney Houston’s “I Will Always Love You). But anyway back to this track from Heiruspecs… This band is new to me but their website refers to Heiruspecs as “the 17 year-old live hip-hop institution from St. Paul (Minnesota)” – so TGSoHH is pleased to have something fresh AND an established band that IS a pretty big deal to grace its pages. With that said here is a “little” blurb about this hip hop institution that band member Sean McPherson sent me… Read and Enjoy!

“Heiruspecs is excited to release their first video from their 2014 album, Night Falls. The video for ‘On the Ground’ was produced by 1 Light Films (Atmosphere, Doomtree, Dessa) and directed by Victor Rukavina and Andrew Melby. The video tells the story of the tricky balance between just surviving and striving in America. The dancer, Eshay Brantley (as choreographed by Alissa Paris), and the song itself encourage the listener to find a balance as we move forward while acknowledging what a difficult crossroads we face. The song makes the political personal as it depicts the difference in communities in Minnesota in summer (verse 1) and winter (verse 2). The hook was sung by the incomparable Chastity Brown. Even as she sings “with all those bridges burning down, I wouldn’t stand so near” the song as a whole points to a better moment when there will be more positives to celebrate in our community.”