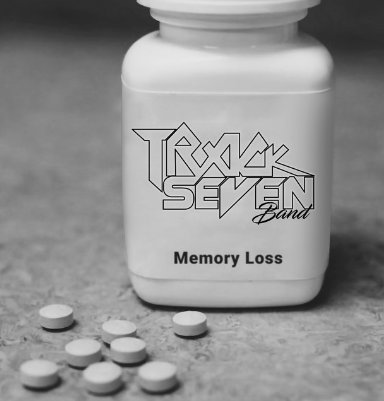 After a long hiatus which included spoofing fans with a rumored band conflict, audaciously introducing a new “pseudo front man”, Cost The Luchador, and months of using lightweight, passive aggresive tactics to tease their fanbase with new music under the presumption of fans “forgetting” about them, New York’s Track Seven Band finally dropped their highly anticipated track “Memory Loss”. And, I admit I fell for their ingenious yet humorous, reverse psychology promo tacticts too – it was all love and true fan engagement.

However, after hearing the “real” front man for Track Seven Band, Cost’s background story on the track and actually listening to”Memory Loss” , I remembered why I fell hard for this hip hop rock band in the first place.

In an Instagram post, Cost provided a deeper meaning behind “Memory Loss” which is contrary to what Track Seven Band had fans “believing” in their promo for the song…

With it’s controversial cover artwork – a pill bottle – Cost stated that what’s in the pill bottle represents all his pain, his music and his life – thus, whatever comes out of that pill bottle alleviates the pain, and keeps his mind off the negativity. Thus, their music is a love high that didn’t originate without some struggle, but Track Seven is here to ensure that you’ll enjoy the beautiful outcome…

And, similar to the mesmerizing summoning aimed at fans by Cost (“Oh really? How y’all gone forget about Track Seven Band?) over the inviting bassline/piano vibe that can be heard on the intro to “Memory Loss”, this is definitely a natural high we should all be ready to get with. I mean, how can you not ride with the band that gave us their poignant 2016 album “The Try And The Fail” where they actually rode for their fans for over two years without delivering any microwave music from their album and put nothing but love, longevity, and creative substance in the Universe? Yep, Track Seven Band been the real “day ones” FOR their fans and I’m definitely here for yet another pleasing musical journey from them. So, let’s rock and get ready to enjoy the moments!

“Memory Loss” is now available on all digital streaming platforms.

All words and no bullshit written by,