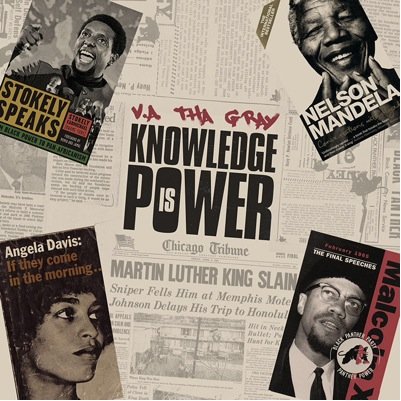 “Knock, knock V.A. Tha Gray delivers a wake up call to an all-over funk infused track on his newest single, “Knowledge Is Power”.

Reminiscing on syrup sandwiches to discovering government lies, V.A. pulls on his life experiences to expose the contradictions imposed on society. Weather you choose to have your voice heard or blow trees and get by, Knowledge Is Power.”

This is another banger coming from the Nile Music Group camp that I’m sure you’ll enjoy!

Born and raised in Dallas, TX, he grew up to the sounds of the legendary Ms. Erykah Badu, Lauryn Hill, Outkast and Kanye West. These artists played a major part in the influence of his sound and tie into the reason he makes music — to give the fans something they can feel.

It wasn’t until college that V.A. had his first opportunity to record some of his first tracks in every rappers first studio, also known as a friend’s closet, and from then on he knew he wanted to pursue his new-found passion head on. The feeling he got from recording those first tracks was a creative high that all artists experience; the ability to turn something out of nothing.

From his first project the “Uncharted Waters EP” in 2011 to his most recent “The Haze Deluxe Edition” released in 2013, V.A. has been hard at work perfecting his craft to really reach fans with his music, releasing content that any and everyone can relate to by making music with meaning and not just for the moment. Look for V.A.’s upcoming project “Blunt Reality” coming the last quarter of 2014.” – Hope Dealers